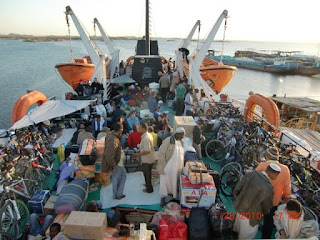 After 30 hours on the ferry and 400 km of riding through the Nubian Desert we have set up camp in the Dongola Zoo.

The ferry was quite a scene...best described by this picture and the fact that I watched 3 people trying to wedge a full refrigerator onto the back deck, to no avail - however they did manage to jam it into the last bit of empty space in the engine room. I shamelessly will admit that I enjoyed a cabin bed(after a quick bed bug test), but many other TDA riders had to jockey for sleeping space on the deck. We had the luxury of boarding 7 hours early, and were therefore probably not very popular with the 100s of others who then packed the lower and upper decks with their TVs, juicers, suitcases and other supplies they were taking with them to Sudan.

On arrival, we had a short bike ride to the soccer stadium in Wadi Halfa - our campsite for the night. We were apparently a bit early, since we arrived to the automatic gunfire of a military exhibition and celebration being held in the stadium.

It was at this point that I felt like I had really arrived in Africa, not just because uniformed men were holding their AK-47s in the air, but also because the terrain and people seemed drastically different then in Egypt. The 100s watching the exhibition were dressed in an array of amazing colors, and were friendly and excited to greet us as we made our way through the crowd.

There was not much food left in the 2 Wadi Halfa restaurants, after we stuffed our faces with fresh pita, chicken and beef kabob, beans, pepsis, tea, more pita...but I'm sure they were happy to have us.

Back on the saddle and back in the desert. Two 150km days followed by amazing campsites on the Nile, under a big moon. Soaking in the river was an unexpected pleasure, especially since the temperature during the day has gotten well into the 30s(90sF).

Yesterday was a quick 100km day into Dongola. I beleive I speak for most if not all of the TDAers, that 3 weeks ago, 100km being considered an easy day?? - laughable.

I have been energized by being in Sudan. The people are so friendly and very hospitable...Ubuntu is strong in here. 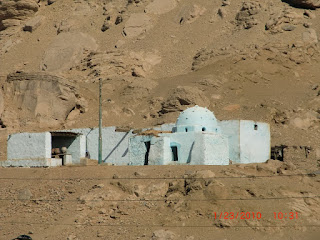 I almost expected OB1 to step out of this little green structure.

We crossed the 1000 km mark at some point today on our way to Aswan. Our ride for the last 2 days has been down the very lush eastern shore of the Nile - lots of sugar cane, banana's and various other crops(see the egg plant truck in the pic). The ride was green but the desert still managed to show its face every now and again. Like the picture above, there were times when I felt a little like I was in George Lucas's brain.

The riding has been rich with activity as we have passed through a lot of little towns and enjoyed the cheering and screaming of 1000's of kids. Its a pleasure to see pure non-materialistic excitement being shown by children, brought on by our group of colorful cyclists cruising through their town. That's the positive experience - on the other hand some riders had to endure some rock throwing, a spit or two, and a few attempts to put sugar cane stalks through the spokes( one such attempt earned the culprit a fat lip).

Tonight will be our last in Egypt. Tomorrow we board a ferry which will take us down Lake Nasser to the Sudanese boarder. There seem to be 2 trains of thought as to what our Sudanese experience will be. The Lonely Planet version is beautiful, friendly, unspoiled, amazing. The WikiTravel's conclusion is dont go - due to strict islamic law(no pictures, no booze, etc.), military rule, and a series of uprisings/rebellions/wars. We shall see.

Egypt in summary - good food, lots of desert(Sahara not mousse), vibrant and busy souks and shopping streets and Ancient Egypt. Unfortunately, the former will all be overshadowed by the fact that it was rare to be able to have a conversation with an Egyptian without them trying or succeeding, in having me give them money(for some sort of service of just a handout). Perhaps this is my first experience of many to come which might highlight the negative effect of developed countries' influence in Africa...or maybe just TIA!!

My observation of the day which seems to be pretty consistent throughout Egypt is that a lot of men dont pratice much discretion when it comes to gawking at, groping and/or being suggestive to women - at least to foreign women. A couple of people reading this post may think they have a couple of friends who fall into this category...much worse here, I can assure you.

Its also interesting to notice piles of garbage that has built up in some of the citys - some say because all of Egypt's pigs were slaughtered due to the Swine Flu.

With that being said, I did have a good day in Luxor - visiting the Karnak Temple - but mostly just walking the streets and eating!

Tomorrow, we are back in the saddle...details to follow.
at 6:16 AM No comments:

We arrived in Luxor today and prepare to cherish tomorrow - our first rest day.

Safaga was an oasis. If I were anywhere else at another time I'd just say it was a "happy place" for sure - beach(bathe), hotel(wash some clothes and bathe), beer, restaurants - not a rest day but it sure felt like it.

This first week seems to have been more of an initiation, as we learn to focus on keeping ourselves and our bikes healthy. Yesterday, included a 65km westerly climb out of Safaga, where we were able to enjoy an amazing backdrop of desert mountains being lit up by the morning sun - the first time I feel like I have taken my eyes off the road to enjoy the scenery.

Last night's camp was at a police check point, where guards armed with automatics faced away from the camp, as if waiting for an frontal attack from over the dunes. I asked one of them who they were expecting, and the response was not english, some laughing and the point of the AK-47 swinging back and forth haphazardly in front of him as he spoke.

The sand gave way to green this morning as we came into the Nile delta, and headed for Luxor.

Time to check into a hotel, reorg and re-evaluate. More from Luxor tomorrow...
at 6:34 AM 2 comments: 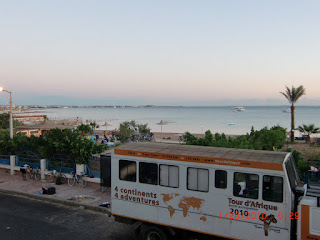 My greatest fear at this point is that my oil pan is going to fall out(cartalk for stomach issues). Yes, toilet talk already, but potential stomach bacteria, long days of biking and the fact that toilets do not exist make toilet talk sort of necessary!

Nevertheless...I am in the town of Safaga, Egypt after 4 days of riding and about 500km(just over 300 miles). Most of our ride thus far has been down the west coast of the Red Sea. Two days ago we had a 160km ride which is normally helped along by a nice tailwind - this year a solid 30 knot headwind waited for us at the halfway point, which made for a day that I hope will end up being the hardest day in the next four months. That wind did reward us with a spectacular lighting storm that night, which made for a nice waterproof test for tents.

We will be in Luxor in 2 days - our first rest day - where I will have some time to send more detail and post some pics.

Cairo's vibrance thus far has come in the form of the Pyramids of Giza and their masses of "guides" trying to make a quick buck; hookah lounges on every corner; Kebab, Baba Ghannoug, Khubz and traffic/driving that makes Manhattan look like Homeville, PA.

Early yesterday, I hailed a taxi to help me find my Grandfather's grave, who died over the Mediteranean as a pilot for the South African Air Force in WWII. After a two hour drive east of Cairo, and then another hour of searching through the small town of Fayid on the Suez Canal - we found it!!! We being Said, my taxi driver, and I. Amazing - A small, green, well kept very tranquil place - home to a few hundred young soldiers. Also amazing was to look at the gravestone I have wanted to see for as long as I can remember.

Said then treated me to some tea and food at the local cafe where we sat and watched the cars go by - not much to talk about since my Arabic is non-existent.

All of the TDA particpants, are present and ready to go. This morning We went for leisurely 20 mile ride, amongst the drivers referenced above, to shake out the cobwebs and look for any last minute adjustments that needed to be made.

One last day of meetings and prep and then we are off. We have our starting ceremony under the Pyramids, and 100 miles of desert road ahead of us. Showtime!!
at 10:32 AM 2 comments:

I haven’t even pedaled a foot on the road from Cairo to Cape Town and already you’ve helped raise a big chunk (10 percent) of my campaign to bring solar electrical power to a clinic in Lesotho. I’m awed and inspired by your response. Thank you so much for your generosity and your faith in me.
As you know, I’m embarking on the Tour d’Afrique, the 7,375-mile bike race down the length of Africa. I’m in Cairo now doing my final preparation and exploring "The City of 1000 Minarets" before we leave on Saturday, 16 January.
at 7:15 AM No comments: 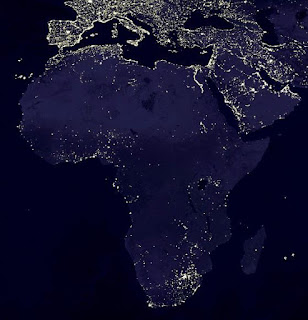