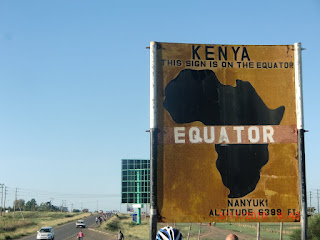 A question I got quite often from the very proud Kenyans. Some were asking how he's doing as President, while others seemed to be asking as if the prez and I might hang out every now and again.

The ride into Nairobi was like playing a video game, where the wrong turn of the control could mean...game over!! The rules of the road (or lack there of), and the huge volume of fast moving traffic made for a dicey day on the road. Vehicles have no problem deciding to pass even if they can see the whites of the eyes of the oncoming driver...so a bike doesn't even count, but in their defense they sometimes have the common decency to blow their horn before they run you off the road. Scary day, but thankfully no casualties on the bike. That's the good news. The bad news is that later that day a TDAer got hit by a bus when walking across the road - I suspect probably because of looking the wrong way, expecting traffic to be on the right side of the road(you drive on the left side of the road once you cross into Kenya). Once again scary, but after spending the night in the hospital they are a little beaten up, but on the mend.

Nairobi was a good day to relax, treat ourselves to some greasy food, and do some shopping, after our north Kenya stint. One rider did have his laptop and cell phone lifted while he was eating in a restaurant in what looked like a secure shopping mall...I guess that's why some call the city - Nairobbery. And making it more understandable for the sudden increase in the presence of security - big walls, electric fences, security guards - a vibe I know well from South Africa, and perhaps will see more of for the rest of the trip. Why was this not the case in Egypt, Sudan and Ethiopia? - less to steal, or scarier punishments for criminals, or maybe a little of both?

The day after Nairobi was a fun 160km ride of rolling hills to the Tanzanian border, but was not free of a little unexpected excitement. In our never ending search for smoother riding surface's - a habit that probably started in the Dinder days and which we perfected in North Kenya - freshly paved road is hard to resist. When I say fresh, I mean, wet, juicy tar. It made for a smooth alternative to the gravel service road we should have been on, but a lot of petrol was needed to get the tar off the bikes and bods. And wet tar is slippery. There were a few falls, and one trip to the hospital.

The events of the that day prompted an evening discussion on the various forms of casualties of the TDA - (injuries, sickness, theft etc.) and how many riders would actually have signed up for the TDA knowing how big the risk it is of becomming a statistic. Hard to say, but I think we all agreed that you can significantly reduce the probability of something bad happening to you by taking extra precautions - but what fun would that be and certainly easier said sitting around drinking bottles of Tusker.

We crossed the Tanzania border early yesterday, where the Americans and Irish were charged $100 for their entrance visa's, as opposed to the $50 everyone else were charged - which prompted the question by one person..."what did the Irish do?". I guess it must go without saying that/what the Americans did to deserve the inflated rate...

We enjoyed a 120km ride from the border over the foothills of Mount Meru into the town of Arusha which is considered the halfway point for anyone making the Cairo to Capetown trek. Also lurking is Kilimanjaro. I say lurking because her presence is massive and close, but I have yet so see her distinctive snow covered peak which has been hiding in the clouds for the last few days. A small group of TDAers left the tour for a couple of days to go and see Kili's receeding glaciers - I look forward to comparing notes with them from my Kili ascent a couple of years ago. Still one of the most amazing experiences I have had!

Since we are halfway we have 3 rest days. Many have continued the adventure, by going on safari in the Serengeti and Ngorogoro crater or climbing Kili, while a few others like myself have chosen to stay in Arusha with our feet up. Its a great time to take care of administrative stuff(laundry, internet, bike service, shopping etc). Personally, I have shamelessly checked into a nice hotel, where I plan on sitting in the steamroom, when I'm not watching crappy TV.
at 1:19 AM