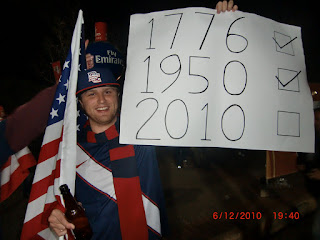 The world cup opening champagne pop was in the form of South Africa putting the ball in the back of the net. As if scripted, the host team scored the first goal of the tournament, which was like throwing petrol on a wildfire of football mania.

Amazingly, in the weeks leading up to this match, South African fans didn’t once seem to think that their Bafana Bafana(Boys Boys) would loose this match, even though the bookmakers thought otherwise…goes to show you the power of positive thinking. Mexico did score and the game ended in a tie, but the disappointment was fleeting, and the celebration was taken to the next level.

The next evening and a few matches later, the soccer world’s attention was on the town of Rustenburg, which is renowned around the world not for its platinum mines, but for its neighbour – Sun City, which is South Africa’s Vegas. Many years ago a handful of mostly American and English pop stars sang the song – “I’m not going to play Sun City” in protest of apartheid. But times have changed, and just outside of Sun City was the venue for the next chapter in the sordid history of the American/England rivalry – summed up best by the poster in this picture.

The streets on the south side of the stadium were teaming with England’s red and white. Alas, there wasn’t much blue on the north side either and much to my dismay most of the locals seemed to be gunning for England as well – maybe they didn’t like the fact the O sent in his Veep.

The Americans were few and the English were confident, until that slippery little ball snuck through the keeper’s hands tying the game and the “U…S…A” chant even overpowered the Vuvusela’s. The final score was decided and no self respecting Englishman would ever be satisfied with a tie in football against a country like the U.S.

“They played like bloody rubbish” …sums up what the English thought of the game.

The tournament is now in full swing and South Africa’s way of life seems to have been altered…at least for now. Emergency rooms are emptier then ever, road rage has subsided and there seems to be a general harmony and unity not felt since Nelson Mandela’s Springboks won the 1995 Rugby World cup. That’s the good news.

The bad news, is that life does go on and there are the reported incidents that remind you of life’s cruelty and the reality of the world we live in. This past weekend a family of four were enjoying their trip to SA to watch the world cup, until the teenage son fell to his death as the family were hiking down Table Mountain.

That story is sad. Then there are disappointing stories like the ANC’s youth party ripping down brand new toilets installed for poor people who have to use a ditch or bush in plain view every time they need to go. The youth party believed that the toilet structure was insufficient, overlooking the fact that a lot of people now had a private hygienic place to poop. I understand the power of political protest, but I’m pretty sure the privacy of a toilet is sacred.

And then there is a touch of comedy in the fact that a lot of the reported petty crime thus far appears to be conducted by foreigners. Not a bad move for a foreign pickpocket to pick up their trade in a country where crime is so bad that a local will be sure to be the first blamed.

Enough of that…this world cup month. The Germans look like a force to be reconned with and the Aruzzi look washed up. But then again, its still early and there are still many games to be played.
at 2:28 AM