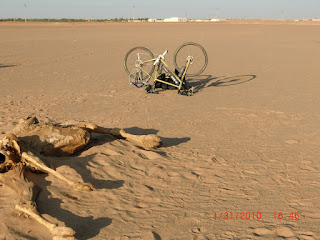 is the best way to describe the last few days. The temperature has been edging into the 40s (thats getting close to 110F) by the end of each days ride.

Now that we are almost 3 weeks into the tour and routines have been established, it seems like a good time to walk through a day in the life of the TDA.

Wake up an hour or 2 before sunrise...usually grabbing a shovel and the baby wipes and heading for the dunes. Since we have crossed one time zone already, this could be 5 or 6 am.

Social interaction at this point usually consists of blinding someone with your headlamp, saying "good morning" and moving along - still not knowing who you've just welcomed to the new day.

Its then time to put on the bike clothes, pack the bag and take down the tent. And for no apparent reason it seems to be a coin toss as to whether all the stuff will be the same size as it was when it was pulled out of the truck the day before. It's right around this time that the official wake up is sounded by music from one of the Overland trucks you've seen in the pictures. The music can be anything from Afrikaans folk to the Foo Fighters. By the way, the unofficial wake up so far comes an hour earlier with a mic check the local Mosque's Muezzin, followed by his call to prayer which has reached us even in the far corners of the desert. Mornings spent in the bigger towns and citys, comes with a full chorus.

Breakfast of Hot cereal (sometimes we are treated to muesli), pita bread, fruit, tea and coffee is served just before sun-up as everyone scrambles to get their stuff into their assigned lockers which are on the big trucks.

After some last-minute maintenance to yourself and your bike, you clock in and are off to work (riding the bike to the next camp) I have been posting pictures of white boards - these are our source of information, and map out the day ahead.

The lunch truck is usually a welcome sight which is set up a little after halfway through the day's ride. At the lunch truck we are treated to an all-you-can-eat buffet of sandwiches and fruit, as well as water and energy drink (Gatorade type drink as opposed to Red Bull).

The rest of the ride is gravy - either ride like the wind to camp, or spin along enjoying the sights and occasional coke stops, which come in the form of street-vendor-type huts that pop up randomly in the desert.

Getting to camp is rewarded with a big pot of freshly made hot soup, which is craved even in the temps of past few days. The rest of afternoon consists of setting up your tent, taking a baby wipe bath, and hunting for some shade, under which to read, write or talk about the day's gossip. If we are not in the middle of nowwhere, there are usually plenty of things to explore, or local foods and drink to taste.

At the cry of "Rider Meeting!" we all gather around one of the trucks, where one of the TDA staff updates us with the next days route and itinerary as well as any miscellaneous suggestions or rule changes. A weekly highlight at the rider meeting is the auctioning of the lost and found pil. The fun starts when someone in need of an item tries to outbid the original owner. The TDA staff benefit from the auction proceeds - beverages of choice.

Dinner is then served - time to replenish for the day to come with freshly cooked food made from local ingredients. James - the man with this enormous task - continues to outdo himself!!

After dinner, people slowly disappear into the night...and oh what nights they are. Clear sky in the desert is certainly something at which to marvel!!!
at 9:41 PM