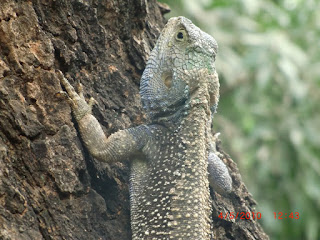 I just polished off a Steer's double cheeseburger and fries with a side of coke...for those in the U.S. that is as close as you can get in these parts to a Stupidesized Double Quarter Pounder with Cheese Meal.

I digress(but it was so good).

Today as we spun through the Malawian countryside, I was paying particular attention to the the little houses along the side of the road. Some were made from some sort of mud, some from brick, but what stood out to me, was how clean the outside of the houses were kept. The dirt yards were swept perfectly clean, with no signs of clutter of any sort. This moment of serenity as I admired to myself the care these people had for their suroundings was suddenly shattered by "GIVE ME YOUR MONEY!".

No I was'nt being held up, this demand was coming from a group of small children along the side of road - sound familiar?? Yes, Malawi is a bit reminiscent of our days in Ethiopia, but the Malawian children are rookies and hopefully they will at least stay that way. No stone throwing, no cursing but there seems to be a bit of an edge to their voice/body language, especially when they demand money. Theft is also a bit of an issue when we are camped in the bush. At our first camp, a couple of bike computers and a few other ancillary items went missing at the hands of the 100's of children sourrounding our camp. That, and the fact that a few people were ripped off by the currency exchange artist's at the border prompted a South African TDA rider to mutter - "I just don't understand it, in South Africa, Malawian immigrants are considered to be particularly honest and reliable".

With that being said, our second stop in Malawi was a rest day at Chitimba beach, which is a small town on Lake Malawi. Tents were pitched and if they didn't have a view of the lake, they were certainly within earshot of the mini waves crashing on the shore. The beach bar and lounge was then the place to be for the next 36 hours, whether it was to grab some wifi, read, nap, or self destrucitvely run up the bar tab. A couple of heated beach volley ball games, seemed to be the only obvoius diversion from the thatched bar. All in all, it was more like a scene out of a Jimmy Buffet song then what would be expected from camping in the African bush. And this scene could not have come at a better time as tension within the TDA camp seemed to have been running a bit high, for no other reason then strains of some newly found heat and humidity, long days in the saddle, and 3 months on the road!!!

Lake Malawi makes up 20% of Malawi's total area and is wedged into the bottom of the great Rift Valley, making for some beautiful views. It also made for a nice steep 10km, 8% grade, climb away from Chitimba beach, before we settled in for another 100km through the surrounding valleys, as we started our ride away from the morning sun for the first time since Cairo. Since then its been a few hundred km's of rolling hills, to the capital, Lilongwe.

Malawi is so lush, and beautiful. But yet it is dirt poor, and has a very low life expectancy. It's easy to wonder how can this be so, but a very dense population and a high prevalance of HIV/AIDS, is probably a huge drain on its resources. And like so many times on this trip, I wonder how this problem can be fixed. Ubuntu is global - yes? By the way, Madonna happens to be in Lilongwe this Easter Monday(a public holiday in Malawi).