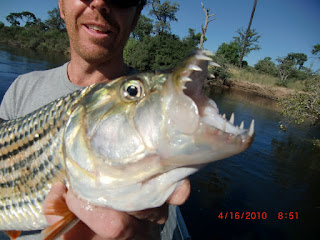 As our skiff drifted down the Zimbabwe bank of the Zambezi river, I knowingly pointed out the we were hearing the distant grunting of hippos...but was quickly corrected by our guide who told us the noise was simply cars driving over speed bumps on the nearby road. After the laughter subsided we did hear the real thing and a few minutes later I got a small taste of why the hippo is such a fearsome animal. Our boat passed close to a herd of partially submerged hippos, and apparently we were a bit too close for mom's liking. She turned to face us and, with no hesitation, lunged forward and disappeared below the surface. I turned to the guide and asked how fast hippos can move underwater - 40kph(about 28mph) was his response. Since we were about 30 feet away, my quick calculation induced a nice shot of adrenaline into my system...i.e. panic attack. Seconds later the hippo surfaced about 20 feet from us and as it went under again, our guide moved the boat to a safe distance, and soon we resumed our quest to catch the mighty Tiger Fish. Now that is a healthy fear, although I doubt we were ever in any major danger.

An equally healthy fear is what one feels while sitting on a grated platform, 100 meters(over 300 feet) above the Zambezi River Gorge, while a stranger ties a rubber band to your ankles. "Toes over the edge, arms out, head up and on my count...5,4,3,2,1, Bungee...you jump". A few seconds later, after the chaos has subsided a bit, you are hanging upside down staring at a very angry river and contemplating the latest chain of events.

All in a days work in Livingstone, the small town on the Zambian side of Mosi-oa-Tunya which is the Kololo or Lozi language term for 'The Smoke which Thunders' and is the name given to the waterfall more commonly known throughout the world as Victoria Falls.

This town should be renamed the Kololo term for "sensory overload". Steep cliffs, high bridges, dangerous rapids, scary wild animals, luxurious hotels, river side camp sites is as much of a haven for creative entrepreneurs as it is for thrill seekers and those who want to settle into a spa retreat with the comfort of knowing that there is pure African beauty outside!

As I was sipping my post bungee Mosi Lager, I overheard someone saying that local Zambians are paid to make the jumps when new equipment is installed. It reminded me of a driving range I once went to in South Africa where the method of collecting the golf balls are people who are supplied with a scoop and construction hat! Although the bungee-tester story is unconfirmed, it still brought me back to the reality of the fear people must experience having to provide for a family when food, shelter and basic hygiene are a luxury. This fear is not healthy.

I have mentioned before that Africa has a draw, one that I have experienced my entire life. But the reality is that the real Africa is dirt poor, beyond poor. It's easy to fall in love with Africa, without taking into account the people who struggle to stay alive each day. My intention is not to imply that tourists should stop enjoying Africa's pleasures, I just think equal consideration and thought should be given to Africa's problems. That awareness in itself I think would go a long way to a bright future for this continent.
at 11:22 PM