The Year of the Tortoise 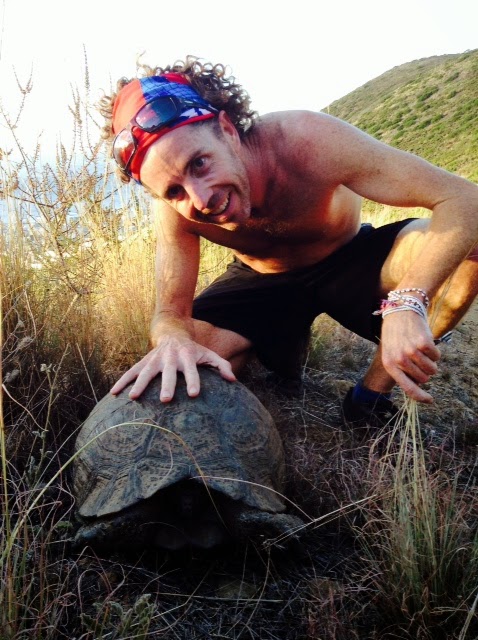 A year ago last night I rang in the new year at a club in Cape Town, South Africa, fueled by mdma and Windhoek lager.  A stark difference to last night watching a giant mushroom chandelier fall in the town of Kennett Square, Pennsylvania, the only stimulant being the the ambient 19 degrees Fahrenheit.

2014 proved to be a year of transformation.

In January I was asked  by a sangoma (South African Shaman), who lives in Santa Barbara, if there was any reason that I was immediate danger.  A few weeks later I moved back to Cape Town to move in with my girlfriend.  On arrival in South Africa I scheduled a medical checkup with the sangomas words niggling away at my sub conscious. Come to find out I had stage two rectal cancer.

The following week was a time of reflection, and integrating the news.  During that week while trail running along Table Mountain I came across a tortoise easily the size of three human heads.  A powerful sign I believe. A sign to slow down, to move forward slowly and attentively.  The next morning I cancelled the recommended surgery and initiated a series of events and lifestyle changes, that I can now look back and say, have drastically changed my life forever.

A Journey began that took us from Cape Town to Philadelphia to the Hudson River Valley, to Abadiania Brazil, to Silicon Valley to San Diego and into the mushroom capital of the world , Kennett Square.  A journey that peeled away insecurity and fear layer by layer.

Philipa, my partner and lover, has been at my side every step of the way. From holding my hand during my pre-surgical panic attack to allowing me to see who I am really am in my reflection through her. Weathering the storm as my deepest sanskara bubbled to the surface.

As was revealed to me in an Ayahuasca journey, this experience is not about cancer, and that I must turn my attention to a much a bigger perspective. I must look at the big picture.  Back then it made sense, but only now is it embodied.  All this change that I have initiated, and am living is not to cure cancer, it is the change that has been waiting to happen for many years. Now it is time.

Pre operative Chemo radiation, followed by successful removal of the tumor, has shaken my body, but yet left it in place of re-birth, to rebuild in a paradigm of greater awareness and wisdom.  A permanent colostomy bag is like having that tortoise at my side, leading me through every fork in the road.

The best year of my life is now a memory, a new network of pathways carved into my consciousness. A new year is at hand in the wake of a new moon and the winter solstice.  What should I expect?  Only the tortoise knows.  Expect nothing and be prepared for everything.